When Holliston, Massachusetts-based Lista International was designing a new series of heavy duty technician toolboxes, engineers determined that they needed to equip the toolbox with extremely robust wheels that could carry weights as high as 7,200 pounds.

The new Technician Series Toolboxes are larger and heavier than traditional toolboxes. Offered in single, double, and triple bank, as well as two-bay configurations, the toolboxes can require a heavier capacity wheel than anything else had Lista offered in the past.

Durability, ease of rolling, and safety locking were going to be important factors. Also important was the ability to stand up to the type of chemicals and cleaners likely to be present in the motor vehicle repair, aviation, and maintenance & repair operation (MRO) environments that would be the primary markets in which the toolboxes would be used. And, last but not least, Lista was also looking for something that would add a bit more style and just a hint of “bling.”

According to John Alfieri, Lista’s Vice President of Sales and Marketing, when designing the new toolbox units Lista paid heed to what today’s technician is looking for – a higher level toolbox that stands up to industrial use but has a more stylish appearance with a wider range of configurations to meet the market need.

Lista found what it was looking for in a unique new wheel developed in collaboration with its long time supplier the C.P. Lauman Company, a Massachusetts based distributor of premier casters and wheels. Lista and The C.P. Lauman have worked together along with their manufacturer Colson Caster Corporation of Jonesboro, Arkansas for more than 20 years, and supplies Lista with the majority of its existing wheels.

According to Colson sales engineer Blake Lamberson and Heidi Alcock, president of the C.P. Lauman, the collaboration with the Lista engineering group for the new technician toolbox wheels was an 8-month design process. It included numerous back and forth meetings and discussions among the parties to choose the best chemical-resistant material, develop finishes, colors, and a new brake design that would safety-proof the units in mobile configurations.

The process began with a concept from the engineering manager, which was taken through development of samples, production of 3-D models, review of prototypes, development of at least three color changes, and many meetings with engineers to agree upon finishes and colors.

The wheel that resulted from the design collaboration has 33 percent higher capacity than Lista’s heaviest duty wheel. “Whereas the majority of typical mobile cabinets use rubber wheels with either 600 or 900 pound capacity for each wheel (for a total capacity of 2400 or 3600 pounds), the new wheels offer a 1200 pound capacity, or a total of 4800 pounds for toolboxes with four casters and 7200 pounds with six casters,” said Lamberson.

The wheels are 6-inches by 2-inches, and feature an exclusive, ultra-tough thermoplastic compound that resists hard impacts and drop shocks. The material used is impervious to most chemicals, solvents, salts, gases, alkaline, and steam cleaning and does not absorb water. It is ideal for the users of the toolbox, where oil, grease, and brake fluids can break down other materials traditionally used in casters. When compared to other hard tread wheels, the wheel model used requires less force to roll and swivel. It is ideal for many industrial and institutional applications. Lista’s Alfieri agreed. “The wheels are made of material that rolls like a charm.”

The new locking system locks the wheel rotation as well as the swivel, making the unit more stable when the lock is engaged. “The total lock brake on swivel casters for mobile configurations added an extra level of safety,” said Alfieri.

And now for the bling. To meet technicians’ growing expectations for style and appearance, Lista asked the C.P. Lauman to come up with a design for a wheel cover/thread guard to dress up the wheel and give it that high quality appearance. The C.P. Lauman and Colson designed the thread guard or hubcap specifically for Lista’s application in conjunction with its Maxim model of wheel. The thread guard is made of high impact material for rugged use, but gives the caster a polished appearance to improve the looks over the standard wheel. “It’s like a car with a great-looking set of wheels,” says Alfieri.

In addition to the snazzy appearance, the new casters, made at Colson’s Jonesboro, Arkansas manufacturing facility, come equipped with a factory warranty from the company, which has been in business for more than 50 years. According to Heidi Alcock of the C.P. Lauman Company, “The warranty brings peace of mind that any issue would be dealt with. In the 20 years that the C.P. Lauman has been supplying Colson casters to Lista, there has never been a field failure.”

This is indeed one case where reinventing the wheel paid off for Lista and the technicians who use the new Technician Series toolbox. In addition to being durable, safe and customized for the work environment, the sharp and stylish stainless steel look hubcap-like wheel cover is now the envy of technicians everywhere.

Every Caster, One Application 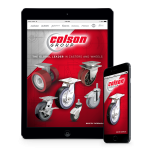